How does fat burning work? 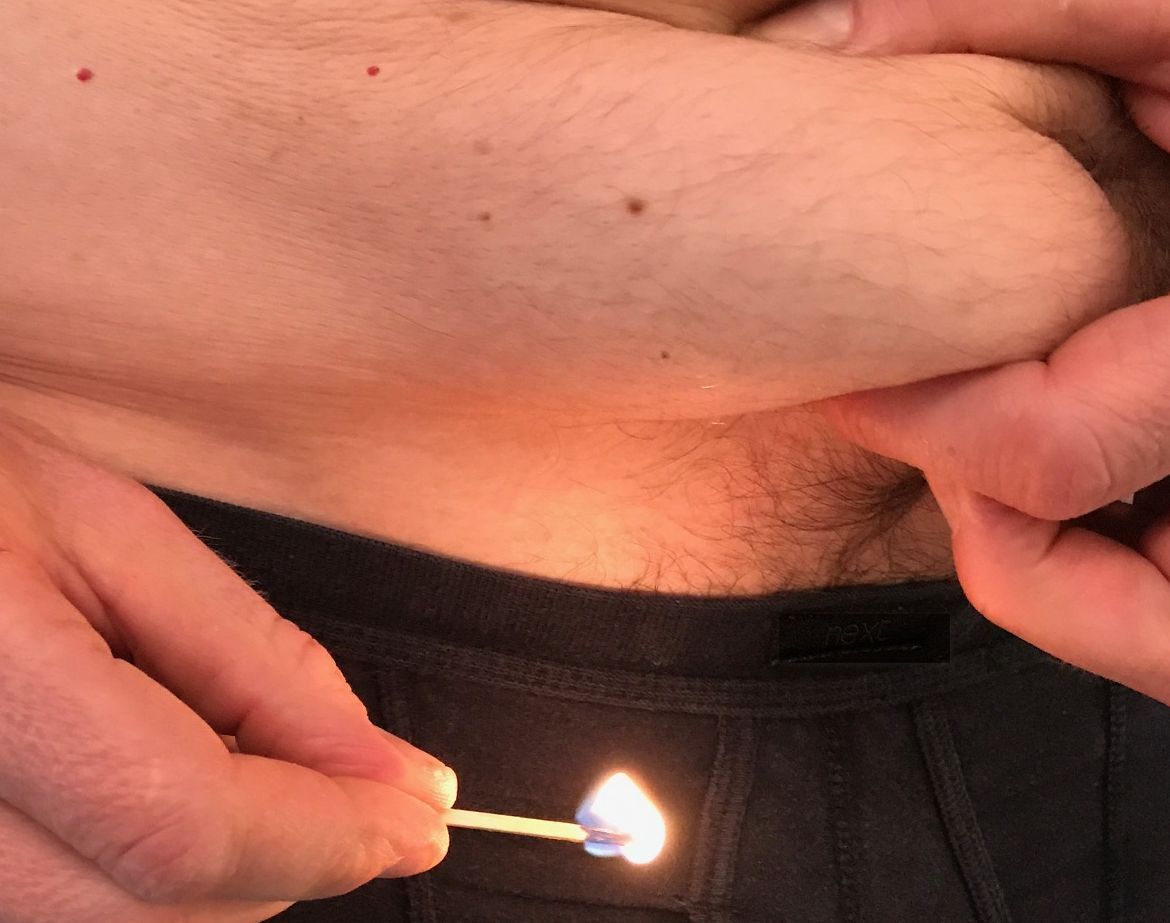 Have you ever wondered what fat burning actually is? What happens to your body fat? After all, it’s your muscles that actually need the energy from fat to power your movement. But you store your body fat somewhere else. What’s the process that gets rid of your stored fat?

In this post, we take you through the steps your body takes to burn fat and in a subsequent blog we’ll explain how you can influence those steps.

Step 1: Get the stuff out of where it’s stored

It might be useful to keep referring to the diagram while you read this section. 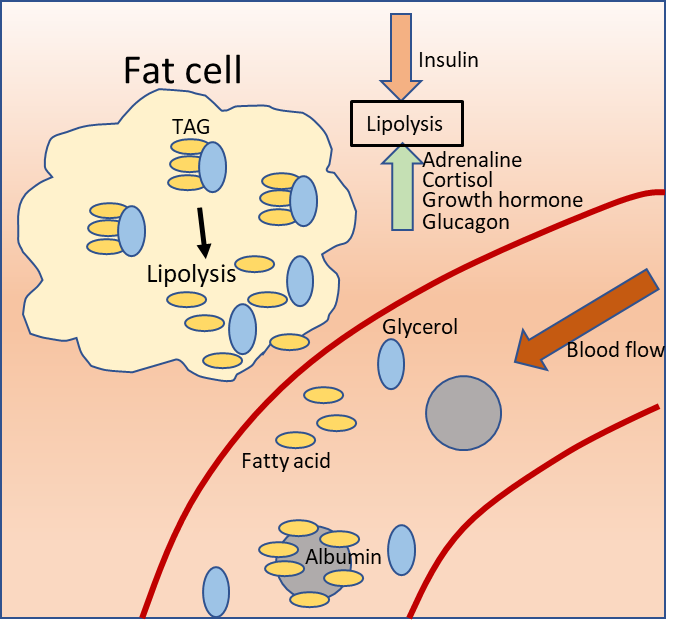 Fat is stored in adipocytes, or fat cells. It’s stored in the form of Triacylglycerol (TAG) molecules. Essentially, these consist of 3 fatty acid chains connected to a glycerol backbone.

We’re not going to describe how those TAG molecules came to be. Let’s just say that your body is very good at making them. For a lot of people, their adipocytes are stuffed with TAGs. Adipocytes have a seemingly limitless capacity to store fat. And we have billions of them.

What’s more, it’s a very efficient way to store energy. Even in very lean individuals, there are tens of hours of energy reserves in their fat stores. Obese individuals could, and have, lasted for months without food.

Your body can’t transport fat to muscle cells in the form of TAGs. It has to break down the molecule into its constituents. This process is called lipolysis. Lipolysis is sometimes confused with ‘fat burning’ and used interchangeably. As you’ll see, it’s not the same!

Lipolysis of the TAG molecules results, not surprisingly, in fatty acid molecules and a glycerol molecule. Fatty acid molecules are further categorised into short chain, medium chain and long chain. If you’re a follower of health and fitness, you’ll be familiar with the acronym MCT, medium chain triglyceride. MCTs, in the form of coconut oil, were popular for a while as a ‘healthier’ saturated fat choice.

Lipolysis is facilitated by 3 different enzymes, each cleaving one of the fatty acids from the glycerol backbone. But this cascade is initiated by hormones. Glucagon, growth hormone, cortisol and, particularly, adrenaline all increase lipolysis. On the other hand, insulin is a strong inhibitor of lipolysis.

Once lipolysis has produced fatty acids and glycerol, these then pass out of the cell and find their way into the bloodstream. Glycerol is swept away in the current whilst the fatty acids have to hitch a ride on albumin molecules.

Although I’ve drawn one fat cell and one blood vessel, if you scale that up by, oooh, a billion or so, that’s more like the scale of the operation. So, you can imagine that when you initiate lipolysis, you get a lot of fatty acids making their way into the bloodstream.

Step 2: Transport it to where it can be burned

Please refer to the diagram while you read this section. 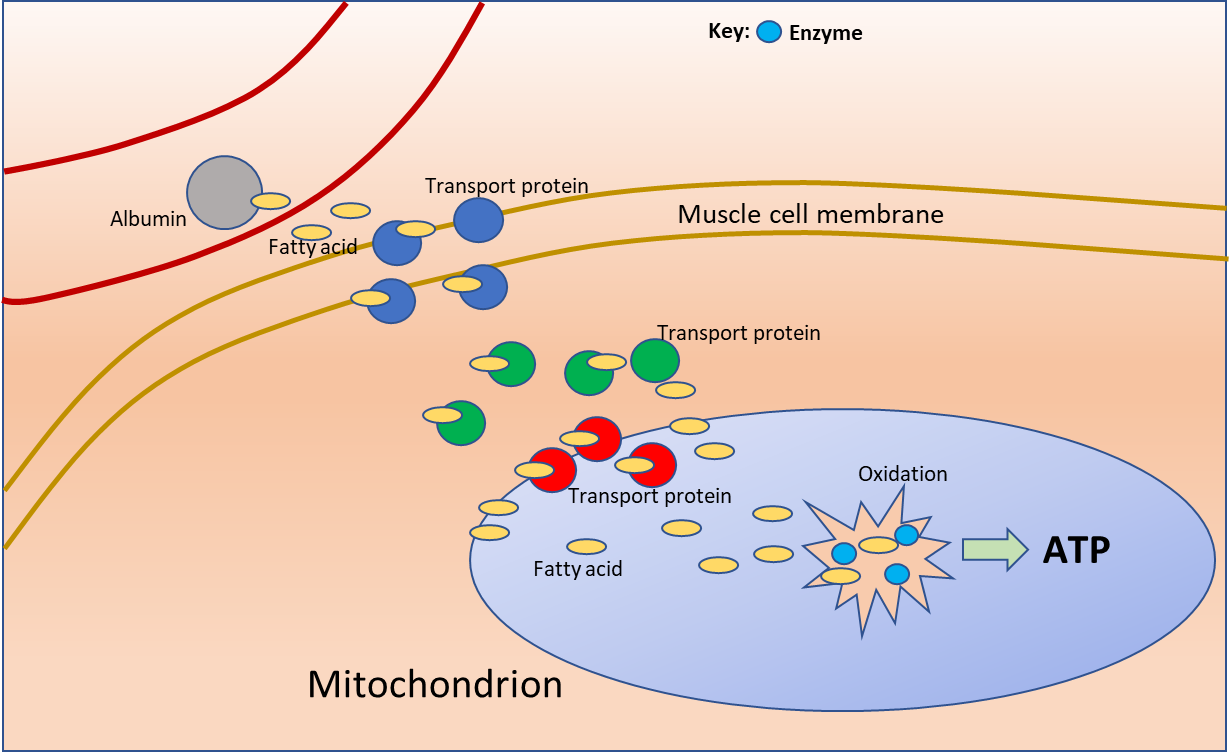 Once the fatty acids get on the albumin bus they ride through the bloodstream. The bus travels through veins and arteries, eventually making its way into the millions of fine capillaries that permeate your muscle fibres. You might be thinking that transporting a fatty acid just consists of this: staying on the albumin bus until it gets to the right stop.

Of course, you can’t just fire the fatty acids across these membranes as they are. That would be too simple.

The cell membrane is in fact quite a complex structure, otherwise known as a lipid bilayer. It’s not going to allow any old molecule into the cell unhindered. No, even the useful fatty acid chain needs to be escorted across into the cell. This is achieved by something called a transport protein. The fatty acid attaches to the transport protein and is then able to pass through the membrane.

There is a little more complexity to this than I have provided. For the biochemists reading this, I’m aware there are more transport proteins, that some fatty acids don’t need a transport protein and I’ve not mentioned the carnitine shuttle. It’s complex enough without the detail!

Again, we need to do some scaling to appreciate the size of the operation. You have hundreds of mitochondria per muscle cell and billions of muscle cells. When the muscles are active, such as when you are exercising, that’s a lot of fatty acids trundling their way towards the fat burning furnace.

Ah, so finally we get to answer the question ‘how does fat burning work?’

After all that trouble of getting the fat to the mitochondria, the process of ‘burning’ fat is relatively simple, at least the way I have presented it.

What do we actually mean by burning it? It’s not like setting fire to it and getting the heat off it. In fact, it’s just a chemical reaction facilitated by enzymes. We would normally refer to this reaction as oxidation, or β-oxidation. In creating ATP, the reaction converts the fatty acid into other stuff, so your fatty acid is no more! Job done, fat gone.

I’ve spared you the details of that chemical reaction, not because I am being kind, but because I find them utterly incomprehensible.

ATP, as you’ll recall from school, is the most basic and immediate form of fuel used by all muscle cells. It’s the breakdown of ATP that stimulates the muscle contraction that drives the human movement. Your muscles need to replenish ATP constantly during exercise, or you’d quickly conk out.

By burning fat and constantly creating ATP, you’re able to continue to function, move about and exercise for extended periods. But that makes it sound like fat burning is ‘pushing’ the process. In reality, the using-up of ATP in muscle contraction is creating the ‘pull’. This pull requires the body to act and oxidise fat to replenish it.

Let’s just be clear though, your muscles can and do, burn other things, notably carbohydrate and, to a much smaller degree, …. shudder…., a muscle protein. If you were great at burning fat, you’d spare those other things. That sounds like a useful outcome!

Why is the detail useful to know?

Do we really need to know how fat burning works? It just happens doesn’t it? Well, sort of. But it works better in some people than others.

Why does it work better in some people? Not because they are special. But because they eat, or exercise or live in a way that makes them better at it or helps them do more of it. Just to be clear, genetics does play a role, and there are fat burning differences between genders. But mostly people get good at burning fat by doing the right things.

I know, that doesn’t answer the question. Why do we need the detail?

Well, let’s look at the things that could influence your ability to burn fat, starting from the fat cells and finishing with ATP production: the amount of fat that gets ‘torched’ could be influenced by any part of the process, including the following:

That’s a lot of influences! The good news is you don’t have to accept that your ability to do these things is fixed. You can improve every one of these fat-burning influencers. You just have to do the right things. That will be the topic of a future blog. We’ll explain all the choices you can make to improve each of these influencers and ramp up your ability to burn fat.

If you change just one thing…

For now, I’d just like to make one observation. In simple terms, you can lose weight in two ways: either eat less or move more. None of the above influencers of fat burning are improved by simply eating less and not exercising. You can improve every one of them with exercise. There are some cheeky little devils in the detail that will help you get really good at fat burning. But if you make just one change to improve your fat burning, make that to start exercising.

The complexity of human physiological processes is mind-boggling. How we have evolved over billions of years from the primordial soup into sophisticated and reliable biological machines is barely comprehensible.

But, I’m pleased to say, clever people have at least figured out how we work. That allows me, a health and fitness expert with a modest understanding of biochemistry, to present it to you in an accessible way that relates to exercise and lifestyle. In a future blog I’ll tell you how you can make use of this information and make changes in your lifestyle to get better at burning fat.

Exercise improves all of these.

If you don’t want to wait for the follow-on blog, then please get in touch, and we’ll get you started sooner on improving your body composition, as we’ve done for so many clients already.