The Health Risks of Sugar 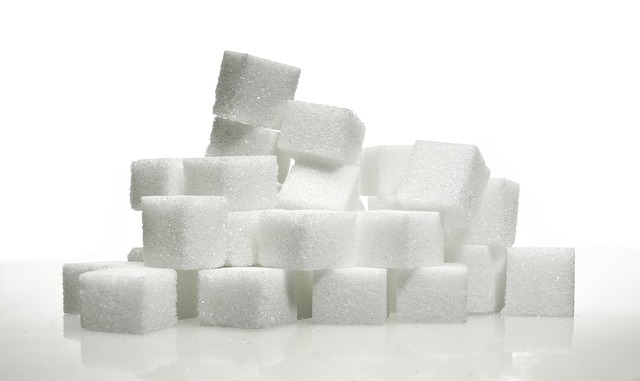 I’ll never forget the alarming incident that Samantha and I experienced a few years ago following a high sugar intake. Surely a health-conscious guy like me doesn’t go near sugar? Generally, no, but there is one occasion where it is not just ok, but encouraged. Immediately post-workout it is common practice to down a whey protein shake with a large dose of fast acting carbohydrate, i.e., sugar.

On this occasion we had had a big workout, chugged the aforementioned shake and then walked the two miles home. Towards the end of our walk we both experienced a blood sugar low to remember. Cold sweat, weakness, disorientation and difficulty stringing a sentence together, followed by a forced sit down on a wall. Samantha experienced a marked change in her personality and mood. She was suddenly suspicious and fearful of me, started pushing me away, accusing me of trying to poison her. Through the fog of disorientation, we had a difficult conversation but eventually managed to stagger home to get something to eat, which quickly improved our symptoms.

Read on to find out – you might be surprised by what you didn’t know!

That’s a good question, and one that can be answered in a number of ways, but let’s start with a purely factual, scientific definition.

When you see added sugar on a food label, it’s generally sucrose – if you’ve ever made cakes, biscuits and puddings, you’ll have spooned in standard table sugar.

So that’s the literal scientific definition of a sugar – not that useful. In order to understand why too much sugar is bad for you, it may be more useful to think of sugar in the way it affects our bodies.

I know, they all sound quite innocuous, but read on to understand more. Let’s look at each of these in turn.

Health Risks of Sugar: The Effect of Food on Blood Sugar

Why is a rapid rise in blood sugar a bad thing? Here’s why…

When blood sugar (blood glucose) rises, the body releases the hormone insulin. Insulin tells the cells around the body to get ready to absorb nutrients, including glucose. We say that the cells are sensitive to insulin, they are receptive to its effects and so allow the passage of nutrients into the cells. As glucose is shuttled into cells and energy stores, so it is taken out of the blood, enabling blood sugar to be controlled within a defined healthy range.

When blood sugar rises quickly, as it may do in response to a high GI food, the body releases insulin rapidly in an attempt to stabilise blood sugar levels. High insulin levels lead to a rapid uptake of glucose into cells and a consequent rapid reduction in blood sugar. Insulin is not cleared instantly and it continues to drive blood sugar down whilst it is circulating. This can lead to blood sugar becoming too low. Low blood sugar can give rise to all sorts of ill effects, one of which is ravenous hunger. Of course, ravenous hunger is more than likely going to encourage another high GI feed, another rapid blood sugar rise and another insulin spike. And so the cycle continues.

Back to the story that started this article. What had happened is that Samantha and I had

So, what are the other problems with this insulin response to high GI foods?

First, it can encourage poor eating behaviours and lead to overeating. You’re far more likely to eat too much, too quickly when you have low blood sugar.

So, how do you avoid these problems? The answer is to eat foods that are slower to digest. In general, this means choosing foods that are unprocessed and contain fibre and low GI carbohydrate. Combining foods into meals will help lower the overall GI of the meal, so including protein, soluble fibre, liquid and some fat will all help to slow the impact on blood sugar. When you do this, the insulin response will be much more moderate, hunger will be kept at bay for longer, insulin levels will be kept in check and the body will have a healthier response to your eating behaviours. On top of that, unprocessed foods tend to be higher in vitamins, minerals and other beneficial nutrients, so they are a healthier choice anyway.

What sort of foods have a high GI? Generally, highly processed foods such as breakfast cereals, cakes, breads, crackers, pastries, rice cakes, sugary drinks, sweets and so on. These are foods that either are made from sugar or have been milled, stripped of their fibre and packaged into a food that provides instant gratification. Often, they will have had a lot of sugar added.

But, here’s a really important point.

A food does not need to contain any added sugar for it to be high GI. Take Weetabix, for example. If you look at the food label for Weetabix it says, per 100g, 69g carbohydrate of which only 4.4g is sugar. That looks ok, not much sugar there. But look up the glycemic index of Weetabix, as in this article here, and you’ll see Weetabix, with a GI of 75, is a high GI food. That means it’s going to raise your blood sugar quickly. As far as the body is concerned, Weetabix looks like sugar.

Why does it look like sugar? Because, even though not a lot of sugar has been added, the product is processed, quickly and easily broken down and assimilated into the bloodstream. It might as well be sugar. Here’s an interesting report on Weetabix which talks about the claim made that Weetabix provides slow release energy. It does, but only when consumed with milk. That’s a good example of how you can lower the GI of a food by combining it with lower GI foods. Nevertheless, Weetabix is high GI food. Have it with milk by all means, but there are better choices, like oats, for slow release energy.

So, with that discussion in mind, here’s my first altered definition of sugar: any food that has a glycemic index greater than 70.

Don’t rely on the ‘of which sugar’ numbers on the food label, look up the glycemic index instead. In general, try to minimise foods with a GI greater than 70. I say ‘in general’ because there are exceptions. For example, watermelon has a GI of 72. It’s great healthy fodder. But the difference is that it also has very little sugar in it, so it has a low glycemic load. It’s really the processed refined grains and sugary drinks and snacks that are to be particularly avoided. If you must have them, have them in moderation and infrequently. Combine them with lower GI foods to keep the meal GI low.

As a closing remark to this section, you might find it interesting that table sugar – sucrose – has a GI of around 63. In other words, it doesn’t fit in with the above definition of sugar! Before you decide to shovel in spoonfuls of sugar in an attempt to lower the GI of your breakfast cereal, just be aware that there are lots of other good reasons, outlined below, why this would not be a good idea.

Health Risks of Sugar: Sugar as a Sweetener

We have evolved to like sweet things. This was to our advantage when our genes were being shaped, because food was not as abundant and easily available as it is today. If you found something sweet, chances are it had a good deal of calories. Yay! Scoff the lot in case you don’t come across this opportunity again for a while. We’re programmed to keep eating the sweet thing once the sweet thing has been tasted. Sweet things are moreish.

Not only that, sweet things release serotonin in the brain and produce a pleasure or reward response. Having experienced this once, our brains want to experience it again. We seek out the sweet thing once more in an attempt to reproduce that pleasure response. Something less sweet just won’t hit the spot, you need that sweet thing! You become addicted to sweetness. You’ll have heard the phrase sugar addiction – well that’s what it is. It’s like an addition to anything else – cocaine, alcohol, caffeine, chocolate, nicotine. If you don’t get it, you start to get withdrawal symptoms and when you try to substitute it with something else, it doesn’t hit the mark.

That means sugar can affect your mood. It might raise your mood when you eat it, but away from your sugar feeds you’re likely to experience low mood. As you’ll have seen in our article about the links between diet and mental health, a diet high in sugar and high GI foods has been associated with an increased risk of mental health issues.

So how do you avoid becoming addicted to sugar or get over a current addiction?

First of all, stop consuming the offending foods. You may have to go ‘cold turkey’ for a while, but your taste buds should adapt quite quickly. Our clients report anything up to a week to get over a particular favourite food. Typically, it’s chocolate. If it helps, find a substitute food that gives you some pleasure but doesn’t have the calorie count or addictive qualities.

To avoid a sugar addiction in the first place…. well, just don’t go there! If your taste buds are not constantly overstimulated with intense flavours then you will be able to derive the same pleasure response from healthy unrefined foods. You’ll enjoy the taste of vegetables and all sorts of healthy tucker! Being addicted to fruit and vegetables wouldn’t be a bad thing.

If you like sweet things but are calorie conscious then you can try calorie free sweeteners. They’ll give you the pleasure hit without the calories. But, be warned, you can become addicted to these sweeteners too. In fact, there is some evidence that they are worse because they do not provide calories. The body has a way to tally the sweet signals with the calorie input they provide and decide to stop feeding when sufficient calories have been consumed. With calorie free sweeteners you may not get that feedback and so continue to consume the sweetened food without ever feeling satisfied.

So, here’s my second altered definition of sugar: anything that has been added to food to sweeten it or, on its own, provides a sweet hit. This ingredient is likely to have addictive properties that make people want to overeat in a single sitting and keep them coming back for more.

Health Risks of Sugar: Sugar as a Food Additive

This last section also talks about sugar as a food additive, but this time focuses on other features. There are three main areas of concern

So that brings me on to my third altered definition of sugar: anything added to food that delivers nothing other than simple carbohydrate calories.

Now I appreciate these 3 definitions of sugar are a little contrived, maybe even controversial. And I don’t expect them to be taken up by others. I just think it’s important to understand the health risks of sugar in its broadest sense. I’m simply putting forward a view of sugar in a wider sense in an attempt to show that there is more to sugar than is generally appreciated. It isn’t just about the granulated stuff you stir in your tea or sprinkle on your food.