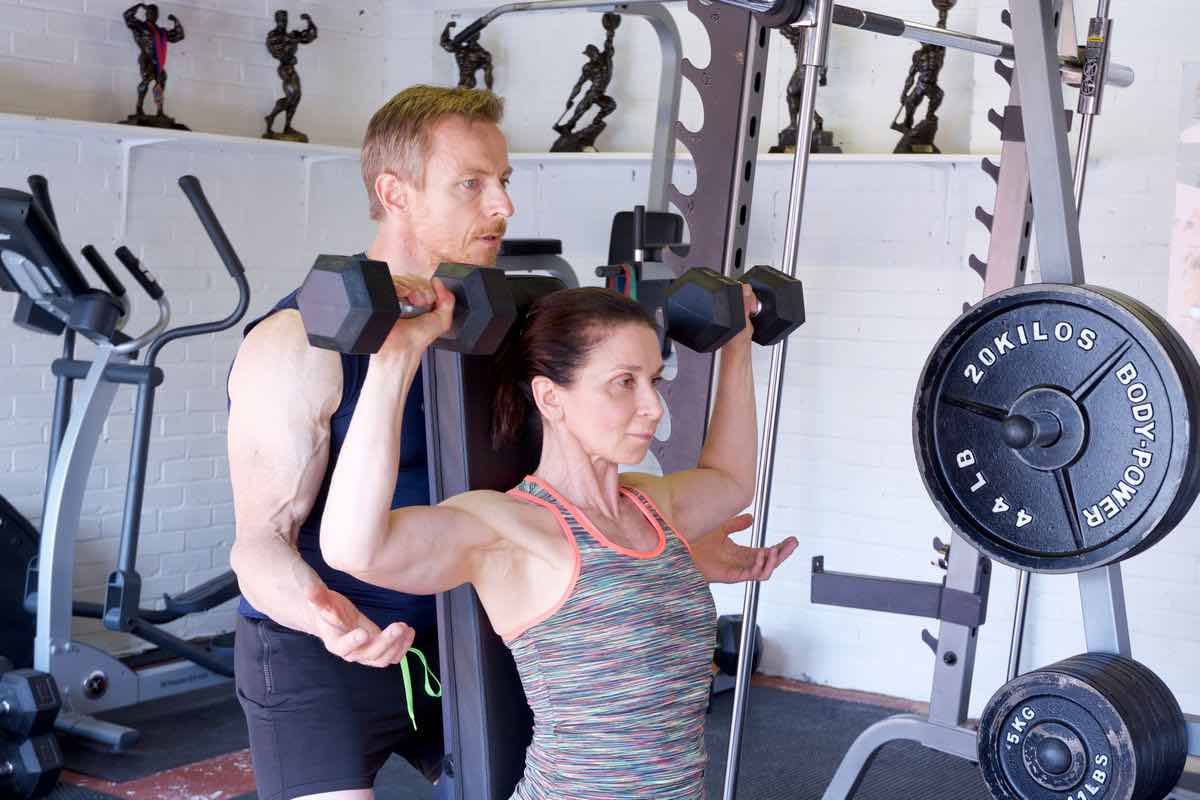 This week we are continuing our feature where we provide our view on which are the top 5 exercises for different body parts.

In the first blog on back exercises, we set out the criteria for selecting the ‘best‘ 5 exercises. To summarise, our top 5 exercises are those that build muscle, or tone, and do so in a balanced, aesthetically pleasing way. They should work well for most people and provide maximum stimulation. As a collection they need to provide an all over stimulus that will develop a well-proportioned pleasing shape.

Not all the exercises in this series are going to work for everyone, but I have tried to choose exercises that most people should be able to perform whilst also offering variety.

This week we give our view on the top 5 exercises for shoulders. Before we list them, let’s just be clear about which muscles we are talking about.

Often you will hear people say “put that across your shoulders”, meaning something (bag, bar….child!”) that sits like a yolk across the muscles – the upper trapezius – either side of the neck. Or you might hear someone say “I’ve got a niggle in my shoulder”, as they grasp their upper trapezius. We’re not talking about that muscle. And because we are focused here on aesthetics rather than function, we’re also not talking about the rotator cuff muscles. That’s not to say they aren’t important – they are extremely important and exercises to strengthen them should be done frequently. I like this article here which is particularly informative. But no, not those either. Here, we’re talking about the deltoids, or delts. In this article here they appear first in the list of muscles that move the shoulder joint. Commonly the delts will be described as having 3 ‘heads’ – anterior (front), lateral (side) and posterior (rear). I will refer to them in this way and as 3 separate muscles. They are relatively small muscles and only 3 of a large array of muscles that move the shoulder joint. So why are we giving them an entire article of their own? Because, in terms of aesthetics, they are important. They give width to the frame, creating the illusion of a smaller waist, and they give tone to the upper arm. People with well proportioned, rounded delts will be judged as fit and strong.

In general, compound exercises for shoulders are either pushing overhead or pulling from below. But because the shoulder is a flexible ball and socket joint, there is an enormous variety of pulling and pressing exercises employing different angles and equipment. In addition to the compound exercises there are isolation exercises where only the shoulder joint moves and the elbow remains at a fixed angle.

You can go heavy with exercises for shoulders but, if your form (lifting technique) is poor or you have poor shoulder posture, your risk of pain or injury is high. You’re better off keeping it strict, adopting a slower tempo and higher volume.

So, with the intro done, on to the list of exercises for shoulders…

The first of our exercises for shoulders is the Arnold press. This is a variation on overhead pressing named after Arnold Schwarzenegger. With a lot of overhead presses, it’s easy to lean back, arch your lower back and turn it into something that looks more like an upper chest exercise. Overhead pressing tends to emphasise the front delts anyway, so adopting that kind of form only emphasises it more.

The Arnold press makes it much more difficult to arch your back in the first place, but the main advantage of this move over standard overhead presses is the rotation of the arm in the middle of the movement. The trajectory of the upper arm gives the middle delt much better stimulation than it would get with standard presses. So, for me, this is a more complete shoulder exercise.

It’s also harder to perform so, if you’ve been used to doing standard shoulder presses with the aforementioned form, you’ll need to use lighter dumbbells to start off with. I tend to put presses later in my workouts these days. So when I get to the presses my shoulders are already fatigued and I don’t have to use so much weight.

You won’t see this done very often in a commercial gym. Most commercial gyms do have a dual pulley, but few people lie down in between the stacks. That doesn’t mean you can’t or shouldn’t!

An adjustable dual pulley works really well for delts because you can work both shoulders at the same time with their own stack, you can vary the angle of pull and you can vary your body position between lying, standing and seated. It’s really versatile. I like the two handed lying lateral because it hits the side delts really nicely and is strict – there’s little opportunity to sway the body and cheat the reps. You can vary the angle from steep, incorporating the rear delts, to shallow, incorporating the front delts. I’ll sometimes do 5 sets, all at different angles.

This beats standard dumbbell lateral raises any day. With those you have limited scope for varying the angle and a lot of people use too much weight, tend to use poor form and shrug the movement. With this lying cable version there’s no shrug, there’s variety of angle and strictness of movement.

A tempo of 2-0-2-0 (2 seconds up, 2 seconds down with no pausing either end) works really nicely for this, you’ll get a good burn and a decent pump.

This is our ‘pulling from below’ movement. You can do these standing with the pulley coming from below, but you’ll find you’re less stable and getting pulled about by the weight, particularly as the angle becomes shallower when you move the pulley up. With the lying version your body weight provides the force that stops you getting pulled around and you can vary the angle without needing to lean back to counter balance the weight. And, like the lying laterals, it’s stricter too.

The upper arm trajectory is not dissimilar to the lying laterals and the emphasis on the different heads is achieved by adjusting the pulley angle in a similar way. Despite the similarities, the upright row has a distinctly different feel to it. You can pull a lot more weight and put a good deal of force through the delts. It becomes a heavy compound exercise.

A good number of our clients have poor form and experience pain with overhead presses whereas this version of the upright row rarely causes any issues.

A lot of rear delt exercises are done bent at the waist or seated leaning over. These are a challenge because of the need to stabilise the body, so a lot of body sway is possible. Obviously, this takes focus away from the delts.

In this version gravity holds you in place so you are free to move the weight strictly and really target the delts, particularly the rear delts. You can use dumbbells for this but they tend to be a bit cumbersome and wobbly. The barbell version allows for smoother form, a variety of hand spacing and more consistent emphasis of the rear delts. It also allows you to use more weight. I like to use a wide grip width and attempt to touch my chin with the bar, keeping my elbows as forward as possible.

The final of our exercises for shoulders is battle rope circles. Not a traditional ‘lifting iron’ kind of exercise you might say. No it’s not, and it’s also not something you would use on its own as your main exercise for delts. But it works well – and I mean really well – as either the first or second exercise in a superset or as a finisher using several bursts to failure with short rests.

Don’t believe it? Try it as a pre-fatigue before Arnold presses, as a second exercise supersetted with upright rows or as a finisher in its own right – seven bursts to failure with 15 second rests. See if your delts aren’t pumped to the max!

So, there you have it, my top 5 exercises for shoulders or, more specifically, delts. When designing your workout for shoulders, try to choose one press overhead, one pull from below and then any variety of isolation and compound exercises to create complete overall delt stimulation. Go for smooth technique, a slower even tempo and lots of volume. Then watch your delts tone up!