What would you choose from this menu? 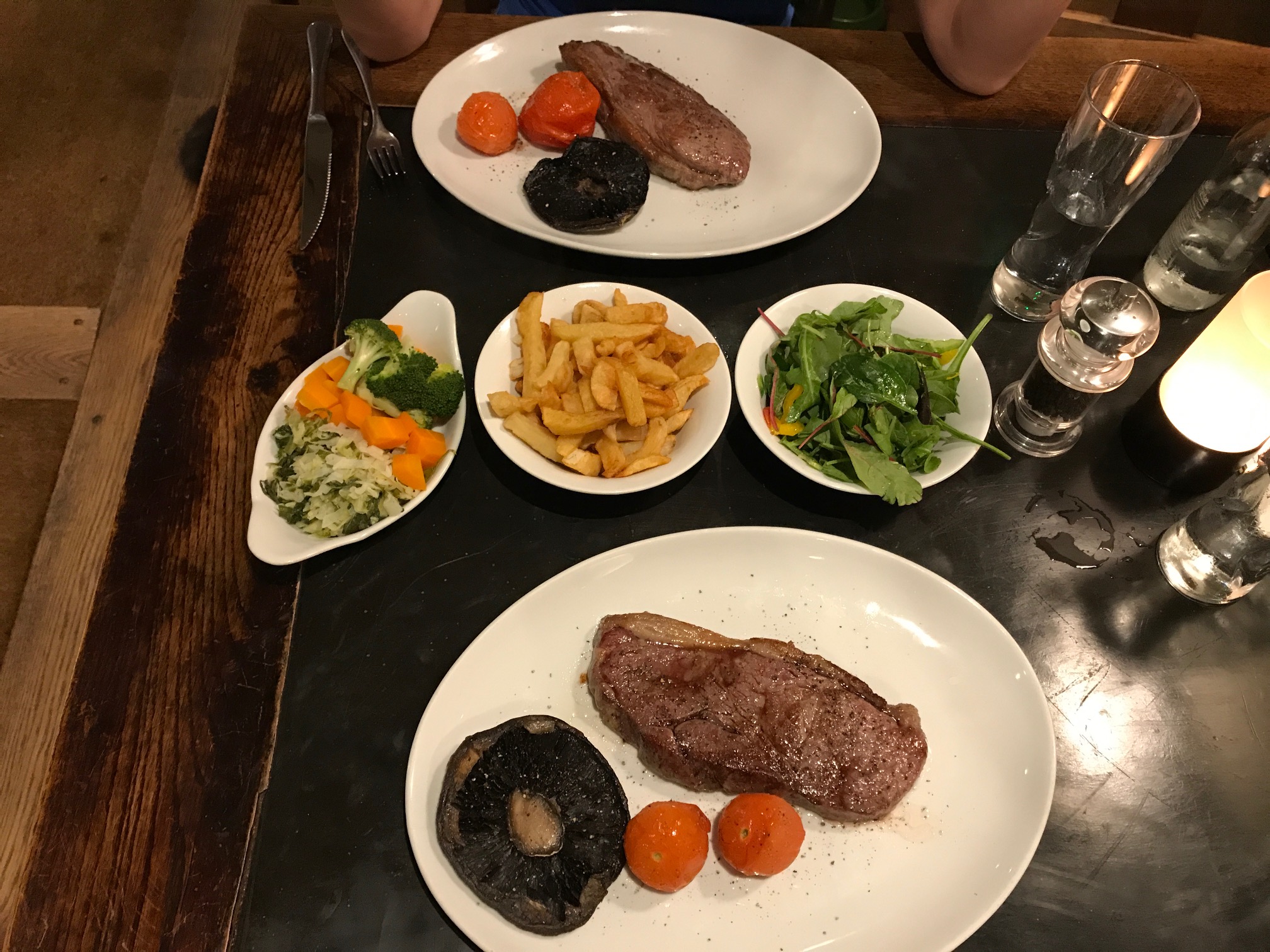 The eating out challenge

If you’re trying to lose or maintain weight then eating out can be a challenge. Most restaurateurs aren’t as concerned with the calorie content of their food as us consumers. They want their customers to love their food and say great things about it. They know that we evolved to love calorie dense food. Our brains produce a pleasure response when we eat that type of food. Rich, indulgent, satisfying food is, in general, going to get a better review than healthy, calorie sparse food.

That makes choosing off a menu quite difficult at times. But you can eat out and still avoid putting on weight. You just have to study the menu carefully and often be prepared to ask for small changes.

What would you choose from this menu?

We recently took a short break in the Peak District and chose to eat at a local pub. It’s a fairly typical pub menu but, in terms of it’s variety and quality, superior to most I’d say. That said, it still has something in common with all pub menus – large, calorie dense meals. As an aside, in case you’re wondering, the pub in question is The Moon Inn in Stoney Middleton. We had an excellent experience – busy but calm ambience, excellent service and high quality food.

Take a look at its menu.

If you were trying to keep your calorie count down to lose weight, what would your meal look like? What would you choose from this menu?

Here’s what we chose

First of all, we looked at the various options and discounted most of them straight away due to the potential for a large fat and calorie content. That meant anything

Second, having made our choice, we made several alterations. Here’s what we ordered

Could this meal be improved?

Yes! But it’s not bad. Here is a little context and some ways in which it could be improved if you were eating at home.

First of all, portion sizes in pubs and restaurants are ill-proportioned compared to ours and the Government’s recommendations. In general, the protein, fat and traditional carb portions have become too large and the vegetable portions have shrunk to something rather small. This meal is no exception.

The amount of protein in this meal is huge! If we had this piece of meat at home, we would split it between 3 people.

You could finish the meal with some fresh berries or a fruit salad. If you’d had the lower fat carb option of new potatoes, then you could sprinkle some crunchy pumpkin seeds to add some healthy fats. Or why not try this raspberry froghurt?

Earlier in the day we had done a 6 and a half mile walk up hill and down dale, over quite challenging terrain. With lots of stopping at streams to cool the dogs, it took us probably 7 hours, most of which was stomping time. We racked up 25,000 steps and 3,600 calories that day. This gave us some leeway with our choice of evening meal.

That’s some leeway, not loads. Even without onion rings, a creamy sauce and a portion of chips each, this is still a decent sized meal, we reckon about 750 calories. If you had those other things, you’d be well over 1,000 calories. And that’s before you’ve had the bread roll, starter, dessert and two glasses of wine. Add those in and you’re talking 2,000 calories. And bear in mind, this was the meal we chose in order to keep calories down! Some of the other choices would have delivered more fat and more calories.

Despite the leeway, we did’t not go mad. We didn’t have a greasy starter, a creamy cheesecake or two pints of lager. If you’re trying to lose weight or maintain healthy weight, you cannot afford to undo all the hard work you have done exercising by choosing to offset or over-compensate with your calorie intake.

You CAN eat out if you’re trying to lose weight

You’ll definitely find it easier to lose weight if most of your meals are made from scratch at home where you can control the content and size of your meals more closely.

However, the take home message here is that you can eat out if you’re trying to lose weight. Yes, it’s a lot harder to measure and control your calorie intake, but it can be done. You just need

The next time you’re out having a meal, just think about the example above and the rules of thumb.

What will you choose? What changes will you make?